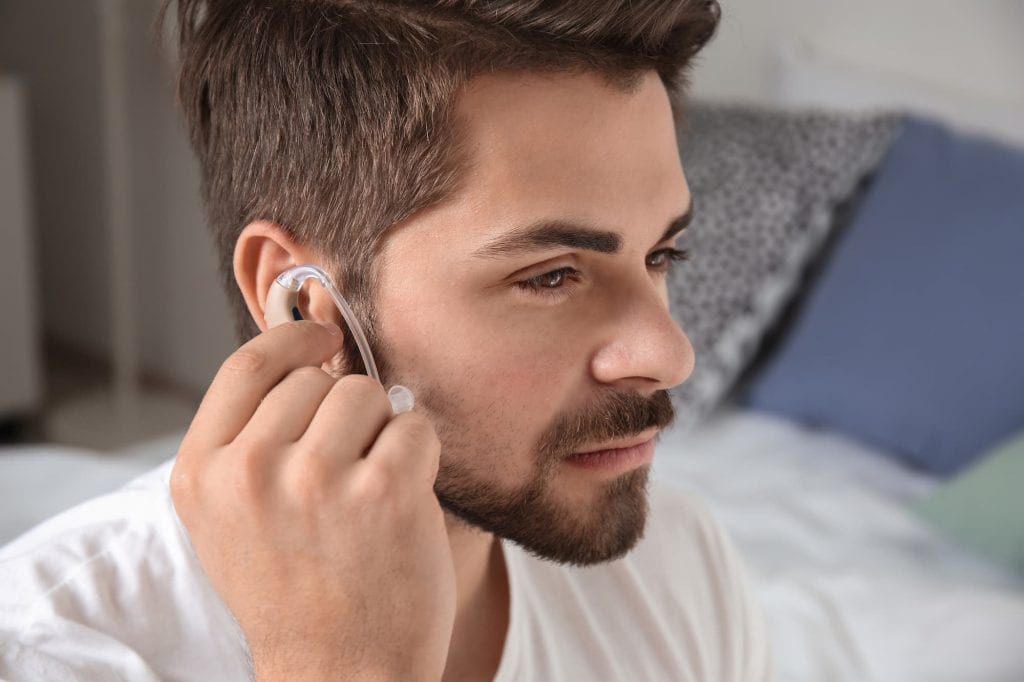 As you read our guide to CROS and BiCROS hearing devices, you’ll learn more about:

Advancements in hearing technology have made it easier than ever for audiologists to provide tailored treatment solutions to suit their patients’ needs. While there is a broad range of hearing loss types, the availability of specially-designed hearing aids is equally diverse.

For individuals who have significant hearing loss in one ear – often referred to as having a “bad ear” – standard hearing aids aren’t useful. Even if you have hearing loss in both ears, if there is a noticeable difference in the severity of loss in a certain ear, you’ll likely feel frustrated by the shortcomings of a regular hearing device.

Because of something called the “head-shadow effect,” sounds or speech that occur on your “bad ear’s” side is blocked from reaching your other ear. Your head is literally in the way of the sound transmitting to the ear that is more capable of hearing. Consonants, in particular, are affected by this effect, presenting severe difficulties in understanding speech and dealing with background noise.

Having little to no hearing in one ear is referred to as single-sided deafness (SSD), otherwise known as unilateral hearing loss. And while it does come with its own set of challenges, single-sided deafness doesn’t mean you have to settle for substandard quality of life. Fortunately, technological innovations have devised many effective SSD options, including specially-crafted hearing aids called CROS and BiCROS.

What are CROS Hearing Aids?

The term “CROS” is an acronym that stands for “Contralateral Routing of Signals.” CROS hearing aids are made to be worn on both ears, even though the wearer is technically deaf on one side. A transmitter in the device on the “bad ear” side picks up sounds, sending it to the opposite ear (the one without hearing loss).

Sounds and speech occurring on both sides of your head are received and heard by just one ear.

What are BiCROS Hearing Aids?

BiCROS hearing aids are extremely similar to CROS devices, except their intended use means that the addition of an amplifier is necessary.

The “Bi” in the acronym represents “Bilateral” because individuals who are good candidates for BiCROS hearing devices have bilateral hearing loss. They have deafness (or near deafness) in one ear, but the better ear has also been affected by some level of hearing loss.

What is the Difference Between CROS and BiCROS?

Essentially, the differences between CROS and BiCROS hearing aids come down to who they are designed for:

Because each type serves the needs of a specific group of patients, there is a slight difference in their functionality:

How Do CROS and BiCROS Devices Work?

Both CROS and BiCROS hearing aids use a microphone to pick up sound and speech near the ear with poorer hearing, as well as a transmitter to send the noises to a hearing device located on the side of the better ear.

Ultimately, the purpose of both devices is to restore 360-degree hearing, eliminating the need to adjust your position to properly hear.

Much like standard hearing aids, CROS and BiCROS devices are offered in a variety of styles, including behind-the-ear, in-the-ear, and receiver-in-the-ear. Depending on your personal preference, you can select the style that works best for you.

Although CROS and BiCROS aids are different in terms of how they work, the devices look exactly the same.

How is the Oticon CROS Different?

Among the recent advancements in hearing aid technology is the ability to stream audio directly from smart devices, which until now, was something unavailable to wearers of CROS or BiCROS devices.

The previous technology could not take in and transmit environmental sounds (such as speech) when the opposite ear’s device was set to streaming mode. So, if you were using your hearing aids to stream sound from your smart TV, it would be very difficult to have a conversation with someone sitting on the side farthest from your better-hearing ear.

But thanks to Oticon CROS technology, you can stream sound while simultaneously taking advantage of sound transmission to your “good ear.” In the scenario above, Oticon CROS hearing aids would make it possible to clearly hear your television program (streamed into your device) and chat about it at the same time.

The biggest benefit of this new technology is that it allows wearers to experience more situations without the negative impact of their hearing loss.

Am I a Candidate for CROS or BiCROS Hearing Devices?

The best way to find out if you’re a candidate for CROS or BiCROS hearing aids is to visit an experienced audiologist for a hearing loss consultation.

Ultimately, selecting the best hearing devices is a highly personal decision. Factors such as specific form of hearing loss, lifestyle, and budget should all be carefully considered.

At Oliveira Audiology & Hearing Center, we prioritize personalized patient care, ensuring that every patient receives tailored treatments that align with their unique goals. Rather than simply recommending generic hearing aids to all patients, our process involves a detailed hearing examination, one-on-one consultation, fitting, ongoing check-in appointments, and more. As a result, you can be confident that you will receive the support and education necessary to choose hearing devices that will flawlessly fit into your everyday life.

For more information about how to choose the best hearing aids for your needs, contact our office to schedule an appointment for an evaluation today.